In interviews with Waseda Chronicle, family members of individuals living with dementia expressed doubt about the effectiveness of drugs used to treat the condition. And they were concerned that side effects such as agitation, nausea, and diarrhea outweighed potential benefits.

That was also the conclusion of the French health authority, which delisted drugs to treat Alzheimer’s from the country’s healthcare system in 2018.

But in Japan, dementia treatment guidelines endorse the use of medication. Skeptics’ opinions appear not to carry much weight.

Using our Money for Docs database, Waseda Chronicle investigated potential conflicts of interest between the physicians and pharmaceutical companies involved in dementia treatment.

Doctors who wrote dementia treatment guidelines bagged an average 1.7 million yen from pharma the year of its release

Five Alzheimer’s drugs, sold by six pharmaceutical companies, are available in Japan. The drug Aricept first went on sale in 1999, with the others all entering the market in 2011.

All of these drugs — donepezil, memantine, galantamine, and rivastigmine — were delisted by the French health authority in 2018 due to “insufficient medical benefit and dangerousness because of significant side effects.” Delisting means they would no longer be covered by the national health insurance system.

But in Japan, these drugs are covered. The country’s latest dementia treatment guidelines, released in 2017 and drafted by members of the Japanese Society of Neurology and other groups, endorse the use of medication to treat the condition. The guidelines have considerable influence, as doctors refer to them when prescribing medication.

Using our Money for Docs database, created in partnership with the Medical Governance Research Institute, Waseda Chronicle examined additional income received in fiscal year 2017 by the 23 doctors who had drafted the dementia treatment guidelines from the six pharmaceutical companies selling dementia drugs. The additional income was earned through activities such as speaking at pharma-sponsored lecture events, consulting, and written contributions to company pamphlets.

In fiscal year 2017, about one third of Japan’s roughly 300,000 physicians received additional income from pharmaceutical companies. The average amount is 280,000 yen (about $2,675). With an average 1.7 million yen each, the doctors who created the dementia treatment guidelines were the recipients of six times the national average in additional income.

However, there was one dementia researcher whose earnings blew them all away.

The researcher is Yu Nakamura, a professor of neuropsychiatry in the Kagawa University Faculty of Medicine.

Nakamura’s earnings came to light at a Nov. 6, 2019 meeting of the House of Representatives’ Committee on Health, Labour and Welfare. At the meeting, the Ministry of Education, Culture, Sports, Science and Technology (MEXT) presented the findings of its investigation — using our Money for Docs database — into 29 practicing university medical professors who had received over 15 million yen (about $143,300 in November 2020) in additional income from pharmaceutical companies.

The figures were used to support the committee’s recommendation that universities review their side business and ethics policies. Representative Mitsunori Okamoto (Constitutional Democratic Party of Japan) presented the committee with documents outlining MEXT’s investigation, including the 29 doctors’ names, workplaces, and additional pharma income. 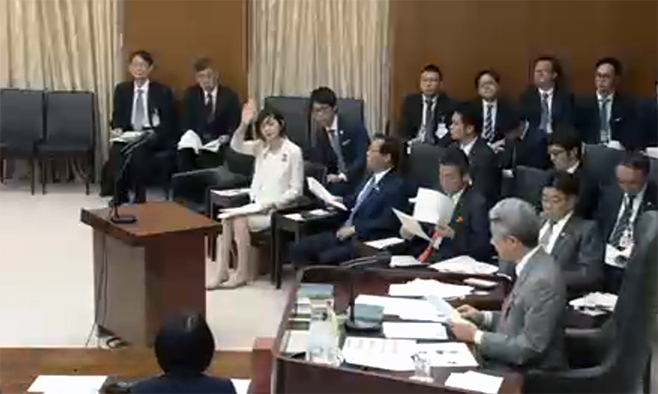 Nov. 6, 2019 meeting of the House of Representatives’ Committee on Health, Labour and Welfare. Image taken from a live broadcast of the meeting.

Nakamura was listed as the second-highest earner among Japan’s physicians. In fiscal year 2016, the dementia researcher had received a total of 25.83 million yen (about $246,800) from pharmaceutical companies, including 19.56 million yen (about $186,850) — roughly 80% of the total — from the six companies selling dementia drugs. 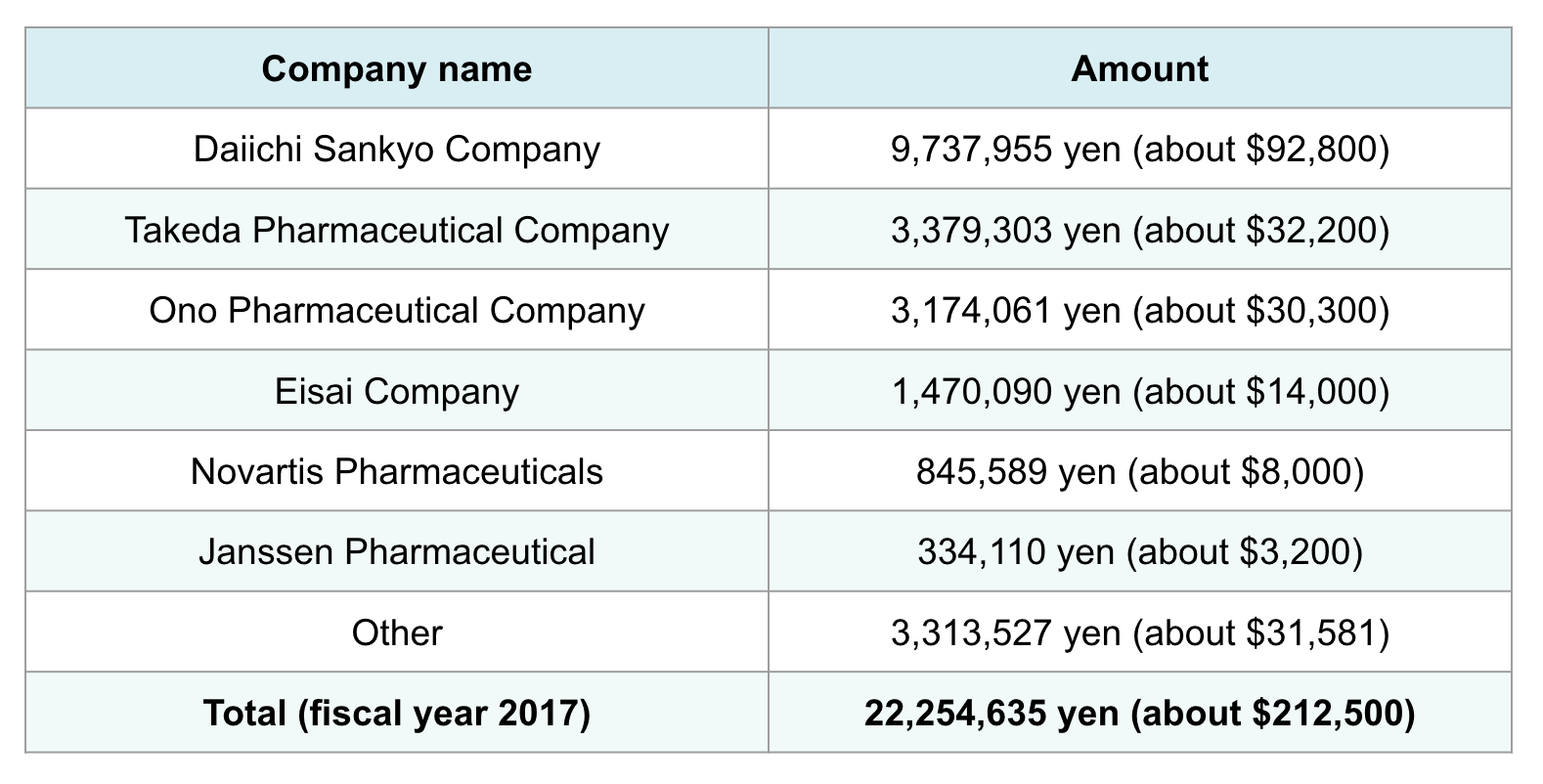 Among the documents submitted to the Committee on Health, Labour and Welfare was a profile of Nakamura published by Jiji Medical, a subsection of Japan’s Jiji newswire.

“For many years,” the article read, “Dr. Yu Nakamura has worked on the research and development of new drugs to treat Alzheimer’s, including time spent as a visiting professor of geriatrics at the Karolinska Institutet in Sweden, which is famous for having the selection committee for the Nobel Prize in Physiology or Medicine. Three dementia drugs, the testing and approval process of which Nakamura was deeply involved in, were approved in Japan in 2011, giving patients more choices and raising both patients’ and caregivers’ satisfaction with dementia treatment. Nakamura has highlighted the importance of early detection and treatment of dementia to slow its progress.”

All three of the dementia drugs Nakamura had a hand in testing were among those delisted by France for being ineffective. And even in Japan, patients and their families have raised doubts about the drugs.

Participation in a clinical trial run by the drug’s distributor

Nakamura had helped test and gain approval of Memary for Daiichi Sankyo.

He was credited as first author in a 2011 article carried in the Japanese Journal of Geriatric Psychiatry titled “Phase III trial of the novel NMDA receptor antagonist memantine hydrochloride for moderate to severe Alzheimer’s disease.”

The following note was included at the end of the article: “This publication is a summary of the results of Daiichi Sankyo’s phase III trial of memantine hydrochloride (trade name: Memary). The first author participated in the trial as member of the protocol committee.”

“Phase three” refers to testing a drug on patients; it is the final stage of the clinical trial process before a drug can be approved by Japan’s Pharmaceuticals and Medical Devices Agency (PMDA).

Nakamura had participated in and penned the results of a Memary clinical trial run by its distributor, Daiichi Sankyo.

Nakamura’s article evaluated Memary positively: “This drug can be seen to exhibit effectiveness against cognitive impairment in patients with moderate to severe Alzheimer’s, as wells as a high level of safety and effectiveness against behavioral and psychological symptoms of dementia (BPSD).”

However, although the trial found a difference in improvement of cognitive functions, such as memory, between patients who were administered Memary and those who were not, there was no clear difference in “symptoms other than cognitive decline,” such as restlessness and aggression.

Nakamura’s article rated Memary highly based on improvements to a limited number of symptoms, rather than improvements across the board. But those limited symptoms were not the trial’s sole criteria for evaluating the drug’s effectiveness. As such, the article’s conclusion touting Memary’s effectiveness could be seen as misleading.

“The trial’s major evaluation criteria are ‘cognitive function’ and ‘overall symptoms,’” Oda said. “In medicine, we can consider a drug ineffective if a significant statistical difference is observed between patient groups for one criteria but not the other. However, this publication takes a rosier view.”

Physician and former PMDA examiner Tetsuya Tanimoto was of a similar opinion after reading Nakamura’s article: “To use a baseball metaphor, it’s like losing the game but bragging about your hits.”

Daiichi Sankyo: “Many instances of lecture fee payments” in order to “provide sufficient information about our products”

Waseda Chronicle requested an interview with Nakamura through the Kagawa University Faculty of Medicine’s PR department. He turned us down.

We tried sending a list of written questions, requesting comment from Nakamura on his additional income from pharmaceutical companies selling dementia drugs, including Daiichi Sankyo. We also asked about his evaluation of Memary in the clinical trial results, as well as the fact that the drug and others like it had been delisted in France.

Again, our request was denied.

What was Daiichi Sankyo’s stance on its relationship with Nakamura? In addition to paying him significant remuneration for lectures and other activities, Nakamura’s article was given as a reference among materials provided by the company and posted to the health authority’s website explaining Memary’s uses and side effects.

We received the following response from Daiichi Sankyo after sending a list of questions addressed to company president Sunao Manabe.

With regard to the substantial lecture payments: “We hold lecture events to familiarize [doctors] with our products’ correct use. In order to provide sufficient information, there are many instances of lecture fee payments to physicians with expertise in relevant fields.

“We will continue to support the objectives of the ‘Transparency Guidelines for the Relationship between Corporate Activities and Medical Institutions’ established by the Japan Pharmaceutical Manufacturers Association. In terms of our relationships with medical institutions, etc., we will continue to strive for our corporate activities to contribute to the development of life sciences, including medicine and pharmaceutics, as well as improve trust and ensure transparency through showing that our work is conducted with the highest ethical standards.”

(Compiled from articles originally published in Japanese on Oct. 29 and 30, 2020. Translation by Annelise Giseburt.)