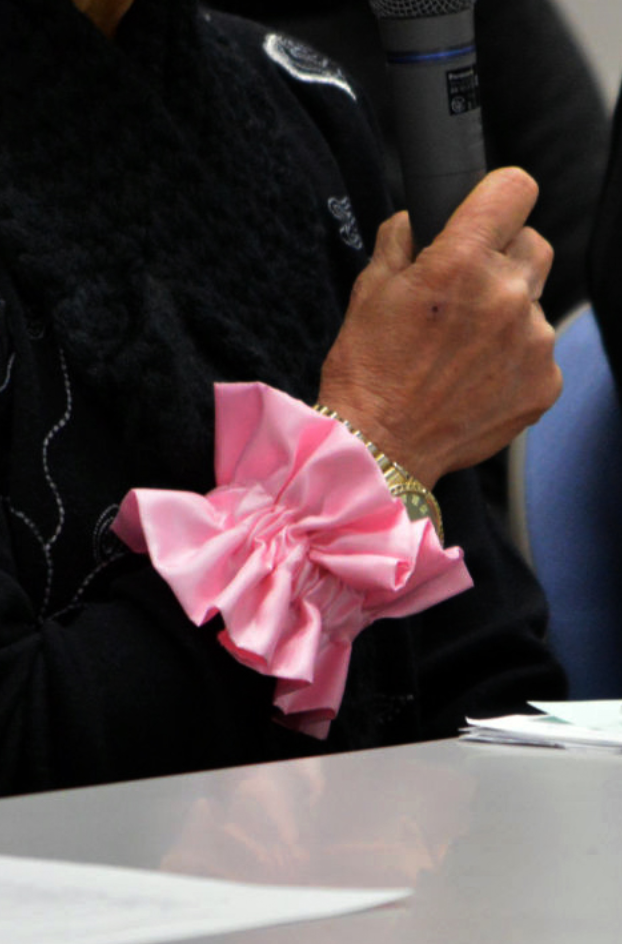 Junko Iizuka talking to reporters at a press conference at the Sendai Bar Association on Jan. 30, 2018. She was wearing a pink scrunchy around her right wrist, a gift from a victim’s family. (C)Waseda Chronicle

Junko Iizuka returned home in 1963, aged 16, just three years after beginning working as a live-in maid in Sendai. One day she found herself doubling over from the worst pain she had ever experienced. The pain in her belly was so bad she couldn’t stand. It has assaulted her every month since then.

One day she overheard her parents talking to each other, which was rare as they did not get along with.

“They sterilized her,” Junko heard her father say.

Junko was born in a village at the mouth of the Kitakami, the biggest river in the Tohoku Region(*4). About 50 families lived in the village, surrounded by the river and the mountains(*5). The village was close to the sea, which was rich in scallops and seaweed.

But nobody in the village owned a fishing boat and people made a living grilling charcoal. Men went away for work in winter.

The chief priest of a local shrine remembered that people called it ‘poverty village.’(*6)

The March 2011 tsunami hit the village and the surrounding area hard, washing away houses. Seven years later, the area is still rife with overgrown weeds. Among the 50 families, Junko’s was one of the poorest.

Her father’s heath was poor and he could only go away to work for short periods. The family lived on welfare(*7).

When she was a first grader at elementary school, her family’s wooden house was burnt to the ground after the bare thatch of the mud walls caught fire.

She remembers that her family fled to a bamboo forest nearby(*8). All they took with them were some futon. In desperate poverty, the family was forced to live in a relative’s barn for a while before moving to a single-story secondhand house.

Her mother worked hard to support the family. She boiled warabi, a wild mountain plant, at night and went to sell it to Ishinomaki City the next morning by bus. When she returned home around noon, she worked in the field and went to look for more warabi.

She could not focus her eyes as she worked too much, and Junko remembers how her mother’s eyes were “messed up.(*9)” Worn out, she once tried to drown herself in the Kamikita River with Junko’s sister on her back. But her mother came to senses and stopped herself when the sisters started to cry.

Junko was the eldest of three sisters and three brothers. She realized she had to help take some of the burden from her mother’s shoulders even as a small child.

When Junko returned home after three years of being away, she started working at a gynecological hospital as a helper. Her father found her the job. She enjoyed the work as she liked taking care of people.

Yet the severe pain kept coming back, forcing her to miss work.

The original Japanese version of the article was published on Feb. 27, 2018.

*7 Based on 1959 children’s record at the welfare office in Ishinomaki, Miyagi Prefecture