Fire at a welfare facility for disabled children:【Forced Sterilization】Junko’s Story (4) 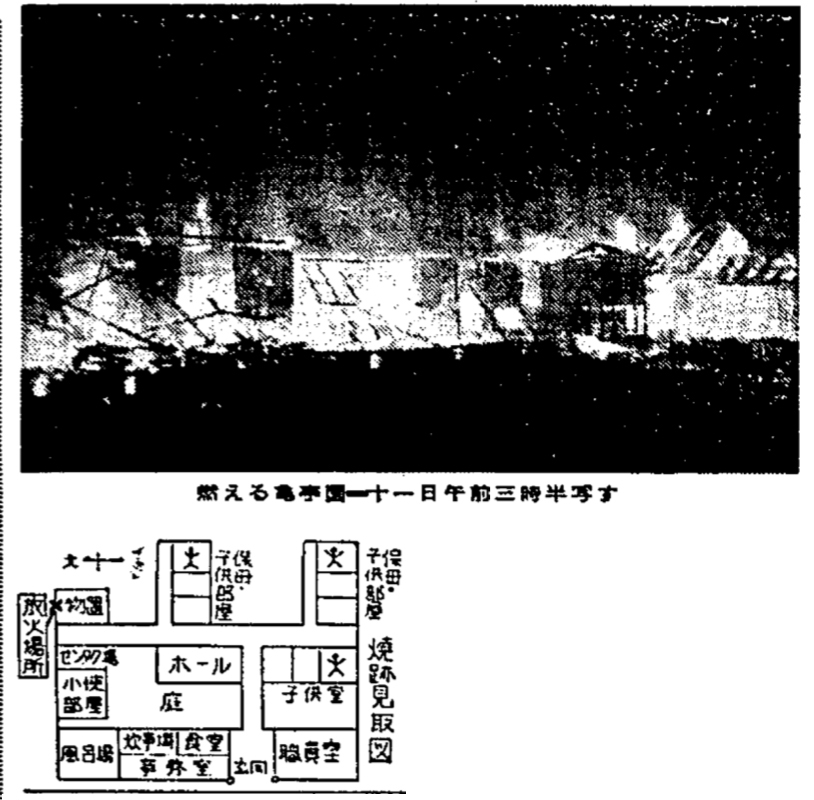 Picture and blueprint of Kitei-en. The photo was taken on Dec.11, 1956 and published by the Asahi Shimbun the following day

When Junko Iizuka was 14 years old, a report describing her as a “problematic child” was created by Miyagi prefectural welfare office and sent to the prefecture’s central children’s guidance center.

“She has been accused of repeatedly stealing, and that has worsened her behavior in the neighborhood and at school.” (*1)

Junko had no clue about any of these accusations.

In April 1960, five months after the report was written, she was forced to enter a new Sendai school for the mentally challenged.

Komatsushima school had just opened that year: Junko’s was the first class of children(*2).

The school was built to replace the prefecture’s only school for mentally challenged children, Kitei-en, which was destroyed in a fire.

The fire, on December 11th 1956, was serious. Four wooden buildings, which at that time housed about 50 children, burned down completely. An 11-year-old girl and boy, and a 16-year-old boy were found dead (*3).

“I’m not sure how they ended up dead, but those three had the lowest IQs and couldn’t speak properly, so maybe they initially escaped then returned to the fire,” Kitei-en’s dean told the Asahi Shimbun at the time.

Around two hundred education and welfare officials working in Miyagi prefecture gathered at a hotel, Shirahagi-sou(*4), in Sendai city (*5).

They were there to attend a meeting that would establish an association for the welfare of mentally challenged children.

The original Japanese version of the article was published on May 1, 2018. (Link: https://www.wasedachronicle.org/articles/importance-of-life/d7/)

*1 According to records attached to Miyagi prefecture’s document titled “Children’s records.” The “children’s records” included a wide array of attached documents, and was created between September and October of 1959.

*4 Currently called Hotel Shirahagi. At the time, it was a two-story wooden building. It obtained its name since 1978, according to a phone interview with Hotel Shirahagi February 24th 17:28.