Tatsuya Takemura quit the former Power Reactor and Nuclear Fuel Development Corp (PNC) without receiving his last bonus. When PNC’s HR department tried calling the company they believed to be his new employer, they were told that “no such person works here.” Takemura’s family also lost contact with him.

I suspected that the stories about Takemura finding a new job were nothing more than rumors.

But why had he left PNC?

At the time, Japan was committed to the research and development of nuclear power, with PNC leading the charge. Going to work for a private company would be like self-imposed exile.

Maybe tracing Takemura’s career at PNC would shed some light on his decision to quit. 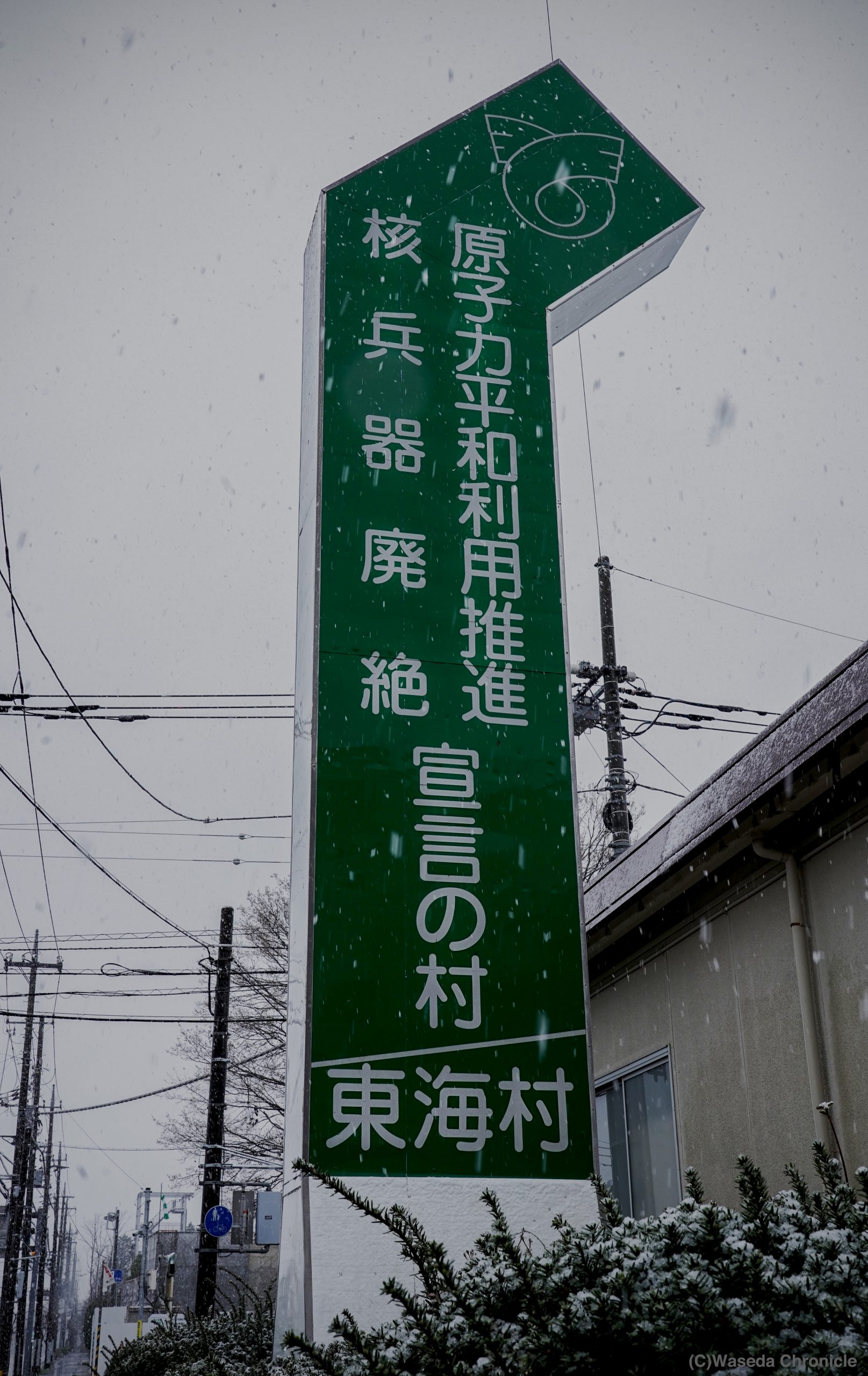 A sign on Donen (PNC) Street promoting the peaceful use of nuclear energy and the abolition of nuclear weapons. Photo taken at 1:11 p.m. on March 29, 2020 in Tokai, Ibaraki Prefecture. (C)Waseda Chronicle

After graduating from Osaka University’s School of Engineering, Takemura entered the Nuclear Fuel Corporation, which would later become PNC, in April 1958. That year, Japan signed a nuclear energy cooperation agreement with the United States.

Nuclear power was born from the same research that produced atomic bombs. The destruction of Hiroshima and Nagasaki at the end of World War II marked the U.S.’s global dominance in the field. But its monopoly didn’t last long, with the Soviet Union and U.K. successfully testing their own bombs in 1949 and 1952, respectively.

Japan first signed such an agreement in 1955, later superseded by an expanded version in 1958. The pacts ensured that Japan’s research and development of nuclear power would proceed according to conditions stipulated by the U.S. In effect, the ones holding PNC’s leash were on the other side of the Pacific.

Takemura was among the best minds at PNC, and his career advanced accordingly. He was even sent to study at Argonne National Laboratory in the U.S.

Argonne is operated by the U.S. Department of Energy. Rechartered in 1946, it had grown out of Enrico Fermi’s Metallurgical Laboratory, which built the world’s first nuclear reactor.

The first person sent by the Japanese government to study at Argonne was Akira Oyama, who would go on to become vice chairman of Japan’s Atomic Energy Commission. After dispatching Oyama in 1955, in the ensuring years Japan continued to send its leading nuclear scientists to the American lab, Takemura among them.

“Takemura led PNC’s researchers,” his former subordinate told me. “He had studied at places like Argonne, and at the time he was one of only four people with practical training on handling plutonium. They were the linchpins of the organization.”

Using what they learned in the U.S., Takemura and the other PNC researchers spearheaded the development of nuclear power in Japan.

“Without any trouble or unnecessary misgivings”

In 1965, PNC completed its plutonium fuel research and development facility in Tokai, Ibaraki Prefecture. That year, members of the International Atomic Energy Agency, gathered in Tokyo for its general conference, visited Tokai to inspect the brand-new facility.

The occasion was described as follows in “Ten Years of Plutonium Fuel Development,” a commemorative book published by PNC’s Tokai office in 1976.

“One could never forget the sight of Dr. Glenn Seaborg, discoverer of plutonium and chairman of the U.S. Atomic Energy Commission, listening attentively as he was given a tour of the facility by its director, Koji Nakamura.”

Seaborg had been a Manhattan Project scientist. Plutonium, which he discovered in 1940, had formed the core of the atomic bomb dropped on Nagasaki.

PNC’s pride in having harnessed plutonium for Japan was evident in the book. Ichiro Ishikawa, the first chairman of the Japan Business Federation, made an appearance among its pages. Ishikawa had been an inaugural member of Japan’s Atomic Energy Commission when it was established in 1956.

“The facility had a magnificent opening ceremony, attended by many members of the Science and Technology Agency and local municipality,” the book extolled. “In particular, given recent tendencies toward abstract arguments and endless debate on the nuclear fuel cycle, the late Atomic Energy Commission Acting Chairman Ichiro Ishikawa exhibited great foresight with his remarks emphasizing the unflagging effort necessary to achieve Japan’s successful application of plutonium [for nuclear power].”

In January 1966, the year after the facility was completed, 240 grams of plutonium purchased from the U.S. arrived in Tokai. The scientists began their tests.

When describing this period, the book praised “the group of scientists who had been trained in handling plutonium in the U.S.” Takemura’s name was among them.

“Under the guidance of these experts, those who had not yet worked with plutonium learned the proper techniques and gained experience. Operations began without any trouble or unnecessary misgivings about the plutonium itself.”

Highly trained and among those entrusted with Japan’s nuclear ambitions, Takemura’s career should have been smooth sailing. So why did he end up leaving?

The book also included a chapter of recollections from PNC employees, including a scientist who, like Takemura, had studied at Argonne. He described how PNC had labored to build its own gloveboxes, sealed containers used to handle radioactive materials, rather than import them from the U.S. It took years of trial and error in collaboration with domestic manufacturers to finally get them right.

“I’ve come to realize that the current plutonium fuel department stands on a foundation built through the cooperation of many, not only PNC staff,” he wrote.

Twenty-one other employees also contributed to the chapter. With titles such as “It takes time to bear fruit” and “Spartan training to handle plutonium,” their entries recounted PNC’s work to develop plutonium fuel.

Takemura left PNC and disappeared before the commemorative book was released. What happened prior to his departure?

In 1969, Takemura was 34. That year, PNC began an assignment to produce nuclear fuel for France’s experimental fast reactor Rapsodie.

But France sent the fuel back. In order to be usable, its plutonium and uranium grains had to be uniform in size. PNC’s shipment contained larger grains of plutonium, and only those ended up reacting. The fuel was a dud.

Takemura had been the one in charge of the Rapsodie project.

“The atmosphere at the lab was like we were at war,” remembered Takemura’s former subordinate, who had entered PNC the year the project began. “Takemura felt responsible for the fuel being sent back and seemed really on edge. Because, success or failure, everyone knew PNC’s fuel was made under his command.”

In order to recover from the mistake, Takemura solicited ideas from his team members and worked through them all. He was even in the lab on Saturdays.

According to the commemorative book, the department produced acceptable fuel the next year “through significant combined effort.”

Following the success, Takemura was reassigned out of the plutonium fuel department. The new position would be his last at PNC.

“It was a demotion,” his former colleagues said bluntly. 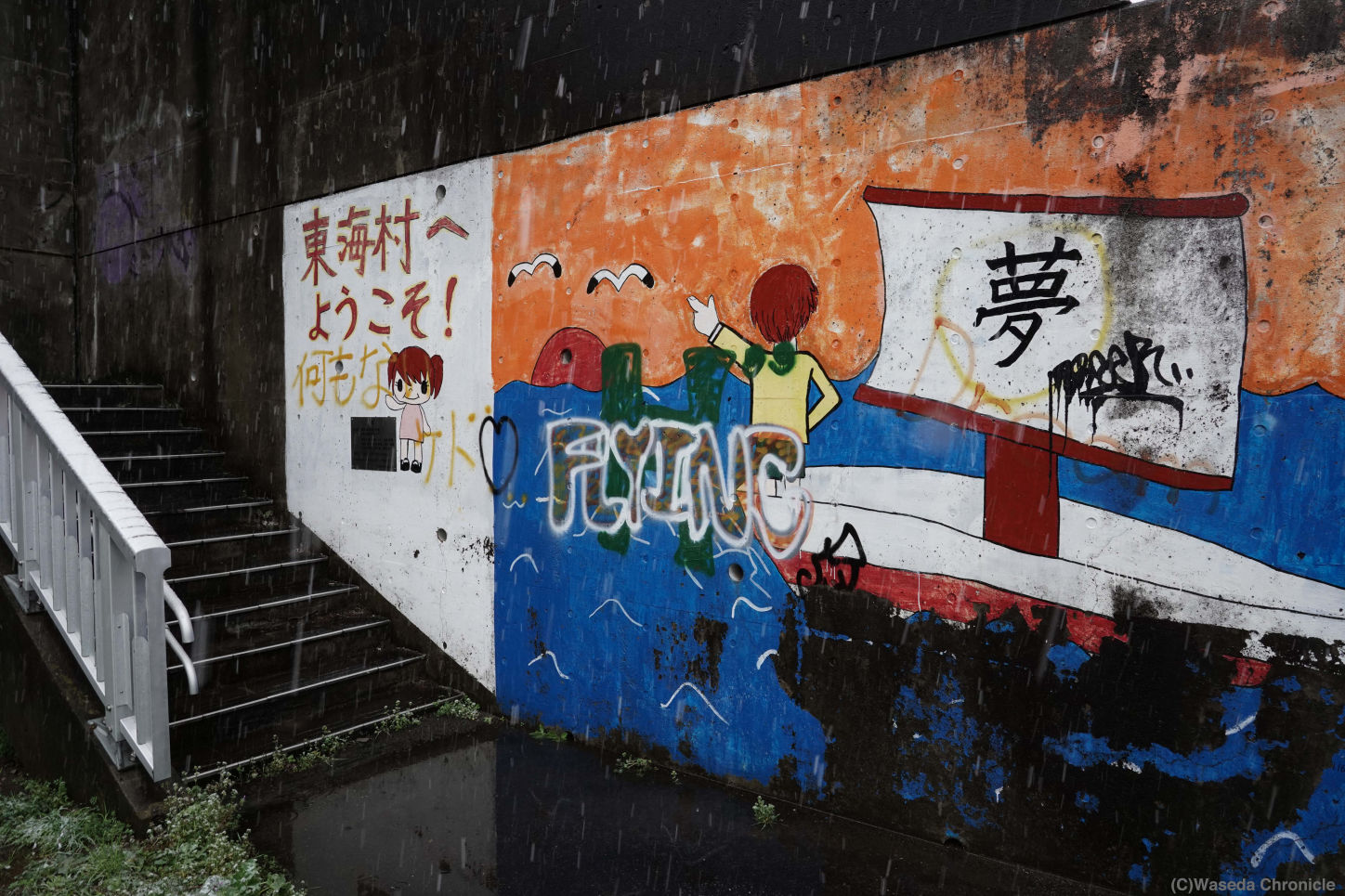 A mural, titled “Dream” and painted by junior high school students in Tokai. The text on the left reads “Welcome to Tokai!” with graffiti underneath adding “although there’s nothing here.” Photo taken at 12:55 p.m. on March 29, 2020 in Tokai, Ibaraki Prefecture. (C)Waseda Chronicle

Takemura was reassigned to the engineering department’s inspection group. His new role was to check the coated tubes that formed nuclear fuel rods. When I spoke to Takemura’s former colleagues, they had no doubt that the move was a result of his initial failure during the Rapsodie project.

Takemura quit PNC and disappeared in 1972. Members of the engineering department would have been the last people he worked with.

I tried looking for them. Takemura’s colleagues from the plutonium fuel department weren’t helpful. As elite scientists, some of whom had studied in the U.S. and France, it seemed they hadn’t mixed with the engineers.

I managed to acquire an employee directory. It had been printed in December 1971, three months before Takemura quit.

Using the directory, I located a former member of the engineering department who still lived in Tokai. He agreed to speak with me.

When I asked whether he knew of Takemura, the man replied: “Yes, I do. It seems he disappeared.”

“I don’t remember where Takemura went to school,” he continued, “But he was a university grad and one of PNC’s researchers. A sober character. Nobody had anything against him, but he suddenly went missing. It must have been his own doing.”

“His own doing?” I repeated.

“Takemura lived in the singles dorm. They wouldn’t let me in since I only had a junior high education and was involved in the union. Anway, Takemura tied up all his loose ends and cleared out of the dorm. Since he was a researcher, he had a bunch of academic books. Well, they were found at a second-hand bookshop in Mito [about 30 minutes from Tokai]. They all had his name in them. I heard about it from someone living in the dorm.

“That’s why he couldn’t have been abducted,” the man finished.

I wasn’t so convinced. According to the scientist who had worked under Takemura in the plutonium fuel department, his Toyota Corolla had been left sitting in the dorm’s parking lot. Could Takemura have been so committed to making himself disappear that he abandoned his own car? In those days, car ownership was still a luxury.

But when I shared my doubts with the former employee, he gave me an unexpected reply.

(Compiled from articles originally published in Japanese on April 27, 28, 30, and May 1)